“My children never did that” – A comedy

Picture a woman walking towards you in Target.  She’s pushing a cart. Inside the cart is a young boy, kindergarten age sitting quietly. Outside the cart is a 3 year old screaming, ‘I don’t WANT to WALK!” He is walking – sort of, but he’s pushed himself between the cart and his mother’s legs in a desperate attempt to stop her from moving. The mother is repeating the same sentence over and over as she takes shuffled steps, “You can ride in the cart or you can walk but I cannot carry you while pushing this cart.” They pass by with the younger child still crying and yelling, the tantrum echoing through the store.

Hi there. Let me introduce myself. My name is Erin and I am the mother of a tantrum throwing, scene causing, stink face giving, attitudey threenanger. Nice to meet you. 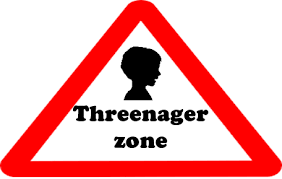 I’ve noticed in my tenure as tantrum kid mom that there are two main types of parents in this world. Those that see a small child losing their shit in public and look at the parent with empathy (and possibly with a side dose of “I’m so glad it’s not me!”) and those who see a child losing their cool and immediately think some variation of, “that parent should be doing a better job controlling their child” or “my kid NEVER acts that way in public – what are they doing wrong?” Or my favorite, “I’ve raised x number of children and MY children ALWAYS knew better than to do that (containing strong undertones of so you must be a shit parent).”  If you want to see me belly laugh go ahead and tell me about perfect children who never threw nuclear tantrums in public and imply that superior parenting is the explanation for good behavior or that there is such a thing as a superior sort of 3 year old. 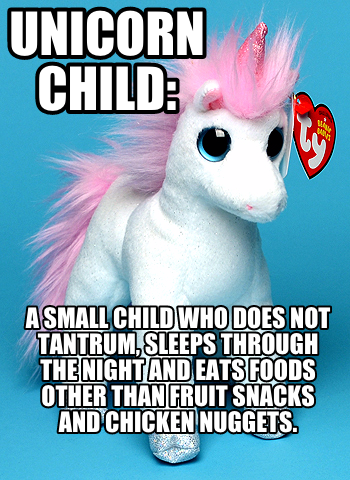 It’s not that I don’t believe children who don’t throw public tantrums exist. They do.  And I’m not throwing shade at parents who have these angel children.  If you have a well behaved child who made it through the toddler/preschool years without giving you Stockholm syndrome then that is amazing. Legit high five.  Just like parents of kids who slept through the night by 6 months old or potty trained before 2, I am terribly jealous of you! And if you know you are lucky to have birthed one of these tantrum free unicorn children you can be assured I am not talking about you. Just don’t claim that your parenting is the ONLY reason your kids are under control and expect me not to giggle. Here’s the thing – I can’t take that statement serious. A long time ago in a land far away (pre second child) I too had things under control once. I see now though how little of that control came from my parenting. This insight has been slammed into my face time and time again since I became the parent of two polar opposite children. Lessons from my children have include many things such as if you want to make a preschool aged child giggle insert the word “poop” into your conversation, and that living with small kids means that someone will most definitely spill milk all over the freshly washed floor – Oh and that I have little to do with how my children are inclined to express themselves during toddlerhood and preschool ages. FYI, this last point is especially true among the aisles of Target.

I know that my parenting may affect how my sons ultimately learn to control their emotions and I hope that years of consistent parenting will provide my children a solid foundation of respect and human decency – but today, my children are preschool aged. And those lessons are still part of their daily upbringing. And as they say, Rome wasn’t built in a day.  And neither was Sesame Street.

My firstborn has always craved structure and rules. With him, a tantrum could often be reasoned down. I could almost always gain control of the situation by giving him an “if then” logical statement. “Hey dude – If you continue to behave this way then we will have to go home. If you can calm yourself down then we can stay and have fun.”  We could step away and mitigate the situation within a few minutes. He didn’t hit. There were no fall down tantrums in stores.  I felt empowered.  I felt like a GOOD parent. With his little brother an “if then” statement is nothing more than a challenge.  In fact everything is a challenge. And the more intervention into his emotional explosion, the longer the problem will persist – the longer he will challenge me to a battle of wills.  Imagine me as Bender from The Breakfast club and my freshly turned 3 year old as Principal Dick Vernon.  “Do you want another, mother?”

When he loses his shit it’s the Win, Lose or Draw method.

When my second little man hit the scene ALL that I knew about tantrums changed. And it changed despite the same parenting tactics I used with my firstborn. Two children, parented the same way by the same parents in the same home with the same rules and structure and yet suddenly I went from a parent that had some semblance of control over every day situations to THAT mom. The mom who is standing in Target with a child who’s legs worked perfectly fine until you entered the store demanding NOW that they must be carried and who is shrugging her shoulders and saying, “whatcha gonna do?” While I think it goes without saying that how you parent can influence the way in which your child learns proper behavior – I will laugh at the idea that anyone’s parenting in those early years of life can magically have that affect right off the bat. Because you know what changed in my scenario? It definitely wasn’t the parenting. Nope. It was THE CHILD. My second little man came out with a “don’t tell me how to live my life” mentality. His natural reaction to being upset is to lose his ever-loving shit. And we are aware. Oh Lord are we aware. And we are working on it. Day by day. Hour by hour. Tantrum by tantrum. It’s a work in progress for us as it is for most parents of small kids. And if you catch us in one of those moments in public you are just seeing one snippet of the process. That isn’t the finish line. We aren’t shitty parents of shitty kids because our child is still learning how to better express themselves.

When my second son hit prime tantrum stage I tried all of the same things I did with his older brother to help mitigate the damage.  And NONE of them worked. Trial and error. Action after reaction. I learned after a few months that all I could do was ride the wave. He’d come out the other end, take a deep breath and transform back into my sweet ray of sunshine. It has stuck me more than once how any 2 people seeing him within a 20 minute span of time might perceive him so differently. The person witnessing his outburst assuming he’s a miserable brat of a child and the person catching him holding his brother’s hand or playing peek a boo with them seeing him as a sweet little boy that made them light up and smile at each of us.

The good news in my house is that we seem to be on the downhill slope of these types of outbursts. I know we have not seen the end of them (today he lost his mind because he wants his OTHER swim trunks and I don’t know where his OTHER swim trunks are and again because he doesn’t want to use the BIG potty) but the peak season appears to be coming to a close.  I have also given up thinking that there is an intervention I could do with this child that would work to calm him – which in turn means I am no longer struggling to try to control a situation that is out of my control.  Hang on while I drop that load of dead weight off my shoulders. With my hands off approach and some deep breathing from both of us (does his still count as deep breaths if there are screams coming out?) we have learned to make it through these tantrums and to continue on with our days.  And you know what? After he explodes into emotion and causes a scene and then exhales his demons out and tells me he’s done,  I still feel like a GOOD parent. His age appropriate outburst does not negate the thousands of other tics in my “attentive parent” column or the daily dose of good and cheer that he brings to the world in the other 23 hours of his day.

Once again my second child has taught me how little I have to do with so many aspects of my children’s personalities. If you have a child who has never required you to perform a full nelson on the tram going into Disneyland then you should most certainly enjoy that designation. But does that automatically mean you have been doing some sort of magnificent magical parenting which qualifies you for the parenting hall of fame and all us lowly tantrum treading parents exiled to “Poor Parenting” USA ?  That’s when I get my laugh locked and loaded. If your small child has never created a major public scene that’s cool. I used to be you. No shame in that game and high five.  If your small child has thrown a shoe across a restaurant, smacked you when you told them “no” or hollered “put me DOOOOOWN”  as if you were kidnapping them instead of trying to safely get them through a parking lot, then fist bump and bff friendship bracelets because right now I am you too. Whether or not your small child has ever caused a public scene I just say it’s more likely that it really has more to do with them than it does with you. And if you have grown children and you want to compare parenting gold stars against me and my preschool aged children for all the tantrums you swear you never dealt with – well check back with me in about 15 years. If my little  darling is still throwing fall on the floor fits in the produce section of Target then I’ll give you a cookie AND a special star.

In the meantime, I’m going to just be sitting over here reminding myself what most people should be keeping in mind when they see a small kid throwing an epic fit in public –

One thought on ““My children never did that” – A comedy”