Just over two years ago I found myself at Target on one of my regular jaunts for diapers and household goods. I had a five month old infant strapped to my chest in an Ergo, a busy two-year old toddler in the cart seat and a prayer.  Anyone who has shopped with small kids knows that a quick trip to the store can go wrong at every aisle turn but after successfully maneuvering the store I decided to press my luck and get a much-needed coffee at the Starbucks on my way out.  The first year of my life as a mother of two feels like a blur and many of the details of that year have been tucked away safely along with my memories of labor and delivery.  I know they happened, I know they hurt, but I can’t remember the exact levels of the pain. What I do remember about this day though was that my husband was away on one of his many business trips and I was dog ass tired. With no back up during the day and a baby who still woke up regularly throughout the night, coffee seemed less like a luxury stop and more like a necessary fuel requirement so despite the long line and the antsy two year old and the ticking time bomb of a hungry infant, I planted myself at the end of the line and hoped for the best. 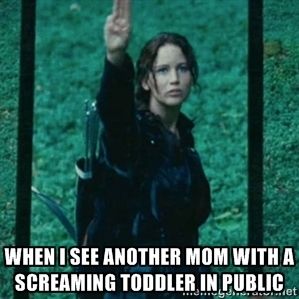 As the line slowly crept forward my toddler was growing impatient. I was doing the mom bounce to try to keep my baby calm (everyone who’s ever had a baby can picture that side to side bounce action, I’m sure) while also retrieving the dollar aisle toy I had used the promise of to bribe my toddler for his good behavior from the floor every 30 seconds or so. My toddler was alternating between laughter, throwing and whining. My infant was trying to squirm his way out of the carrier.  I bounced and rocked and fetched and begged my two children, “mama REALLY needs this coffee so please guys, can we hold it together.” While this was happening I was acutely aware of the people surrounding me. A few looked over at our commotion and seemed annoyed, I’m sure thinking that my responsibility to them was to take my fussing children out of line and give them back their peace.  A few smiled sympathetically at us, I’m sure remembering their own moments in life with small children and feeling empathy. The man directly in front of us in line though, he is the one I remember the most. It felt like an eternity despite the actuality that we were only in line for no more than 5-10 minutes and every minute or so he’d turn around and look at me and my children. I remember not being able to read him. I couldn’t tell if he was annoyed or amused.  I was anxious and tired and self-conscious and while I truly didn’t enjoy the circus that was my sway, bounce, fetch, beg sideshow I also was reminding myself that in just a few minutes I would have my coffee, be out of these people’s lives and could tuck this memory back in the “do not need to recall” vault.  Except here I am recalling it – It didn’t get tucked away and forgotten. Because when that man made it to the counter at Starbucks that November morning he ordered his coffee and then turned to me and said, “And what am I getting for you?”

My first reaction was shock – it was completely unexpected. It took a second for me to register what he was offering and I stammered out that he did not need to buy my drink. He didn’t waiver though. Without a hint of irony he said to me a phrase I heard many times that first year, “you have your hands full.” As if to assure me that his intentions were from the heart, he went on to add that his wife had been in my shoes not that long ago and he wished someone would have done something nice for her on one of those days where her hands felt even more full than normal.

I ordered my coffee and thanked him. I was a little embarrassed to be on the receiving end of this random kindness but more so I was touched. On one hand, it was just a cup of coffee. On the other hand it was an acknowledgement at just the right time that my job wasn’t easy and that even though my kids were “acting up” someone saw that I was trying my best. It felt like an attestment that Target with two small kids is not a simple feat. That late nights and early mornings and midnight feedings are exhausting. That husbands that travel happen but groceries and diapers still need to be bought. That while some people will stare or judge or cringe at a parent with kids “misbehaving” in public that other parents remember.  On a day that I really needed some positive affirmation it felt like the universe was sending me a sign that I was doing something right.

I made a mental note that day that I wanted to pay this kindness forward. As I sat in my car in the parking lot with two kids strapped into their respective car seats and an iced coffee in my hand I made myself a promise to not ever underestimate the power of a simple good deed.

Flash forward two years and I am coming out of the small children fog. My oldest has become much more independent now that he is four and generally much easier to reason with in public. Mr. Terrible Two’s is still a handful but every day gets easier and now that both of my children usually sleep through the night I no longer am living in that constant state of extreme exhaustion. Today I was on a preschool field trip with both my boys to a Christmas tree farm and found myself watching a mom with a toddler beside her and a baby strapped to her chest. I realized how much easier this field trip was for me this year compared to the previous year and it struck me that I have made it to the other side. That’s not me anymore. That first leg of the race is over. I survived being a mother to a baby and a toddler and somehow that realization triggered the memory of being in line at that Starbucks two years ago. I could feel the anxiety of that moment hit my chest – the anxiety of all of the moments where I was mentally preparing my escape route for if shit hit the fan with both kids at once. I was picturing how many times I had a toddler tucked under one arm and a baby in the other and tears in one, two or all three of our eyes.

Today I left the Christmas tree farm and drove straight to Starbucks. I ordered my coffee at the drive thru and when I got to the window I asked to pay for the person behind me as well.  I don’t know if she needed an act of kindness today but I do know that the world always needs an act of kindness today. I hope that random act  was worth infinite times more than the $3.45 it cost me. I hope it was worth a smile and a reminder that little kindnesses can feel bigger than the large life hurdles we are all trying to clear, if even only for a moment.